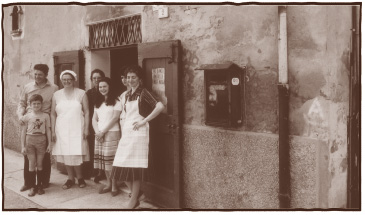 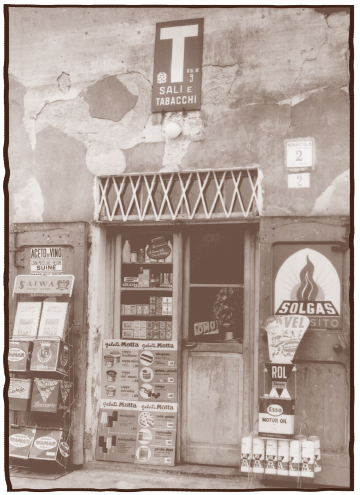 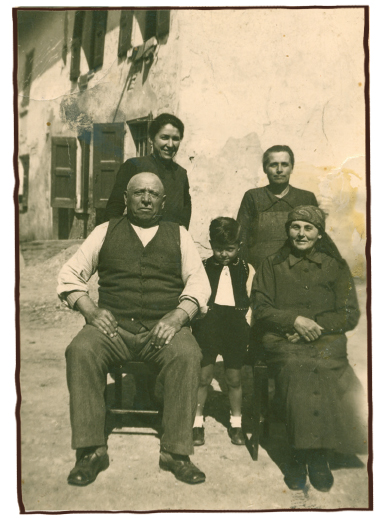 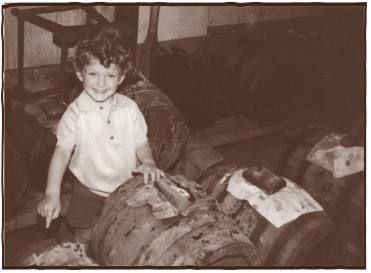 It’s the end of the Estense Dukedom, the Kingdom of Italy has not still come on the political scene, Giuseppe Pedroni is working as a boaro (cowherd) for a farm 1 km far from the nowadays seat.

The farm’s owner lives in an elegant palace in the centre of Modena. He orders Giuseppe to bring him firewood and faggots for the winter coming. When Giuseppe reaches Modena with his cart the landlord is waiting for him in front of the palace. He wants Giuseppe to come into the palace paying attention to the faggots: they don’t have to scratch the plaster. Unfortunately or fortunately this is exactly what happens. A piece of plaster comes off and Giuseppe sees 3 numbers written on the wall.

He decides to place his bet on those lottery numbers (Lotto). He wins a lot of money so he can buy 2 farms and 3 houses. Two of the houses are over the farms, the third, outbuilding of the end fifteenth-century benedectine monastery, is fit to become a “Tavern” and Giuseppe is immediately granted the licence to run it with the right to serve food and offer stables.

The “Tavern” becomes soon point of reference and meeting place for the birocciai (cart-drivers) transporting gravel from the Panaro River to San Giovanni in Persiceto and Ferrara. The Tavern can offer wine, Marsala and beer but not liquor. In the farms starts the production of wine, which has been handed down from generation to generation until today. Giuseppe doesn’t know how to use the casks of Marsala when they are empty, so he decides to start the production of Balsamic Vinegar. The casks, made of chestnut wood, are not of different size, like in today’s “batteries” (series of barrels made of different kinds of wood), but they have all the same capacity of 10-15 liters. The barrels of beer too, ones empty, are used to start new “batteries” of Balsamic Vinegar. They come from Germany and have two different capacity, 20 or 180 liters. This way the batteries started by Giuseppe are made of two different kinds of barrels: the Marsala’s ones, thinner and smaller, and the beer’s oaken ones, bigger and thick. The production goes on in time from 1862 until 1890. These are difficult years when infectious diseases have an hard impact on the population, many people die. Giuseppe’s son, Claudio, dies and Giuseppe, despite his old age, goes on with the work in the Tavern and in the country until he dies too. Claudio’s son, Cesare, succeeds his grandfather when he’s just 18 years old. Cesare continues stepping up the production of wine and balsamic vinegar, getting ahead with the old barrels he inherited from his grandfather.

The Big Wars 1915-18 passes away without big troubles in the area of Nonantola. Meanwhile the activity of the Tavern goes on increasing the number of barrels and obtaining the authorisation to be a bakery and a salt and tobacco shop too. Cesare’s son, Giuseppe II, helps his father until the Second World War overshadows the horizon. Cesare is now old and tired. Giuseppe II works under his father conducting until he dies, ahimè, in 1944. Six months later, few days after the end of the War, Giuseppe II dies too.

His son, Italo, is just 10 years old. It’s 1945. The widow, thanks to the help of Emma, Giuseppe II’s sister, and Claudia, Giuseppe II’s mother, get ahead with the production of wine and Balsamic Vinegar and the Tavern, but the bakery is closed. Time goes on until 1963, with hard work, difficulty and dedication. No more barrels are added as the family has now neither time nor capability to increase the business. Back in 1963 Italo marries Franca Prampolini.

He takes care of his forefathers’ over a hundred years old barrels. In the country the old “piantate” (plantations) are disappearing but Italo understands the true importance, for his family vinegar farm, to preserve two traditional vineyards of his grandfather Cesare’s “piantate”: the Trebbiano di Spagna and the Ruggine Grape. These grapes are very good as smell and alcoholic strength but the vineyards don’t produce much and that’s the reason why the other wine-producers discard them. Italo begins taking care of those vineyards again, and thanks to its grapes he still continues to have an extraordinary cooked must, main food for his casks and for the balsamic vinegar project. All this is the reason why Pedroni’s Traditional Balsamic Vinegar is a much-decorated one on the only yearly competition for naming the best Balsamic Vinegar produced in the area of Modena. Since 1997 both farm and balsamic vinegar production are managed by Giuseppe III, a member of the sixth generation of Pedroni which brought to the forefront of international television family traditions.

Good vineyards, old age, passion and never overexploiting the barrels: these are the factors that let us win a reputation.